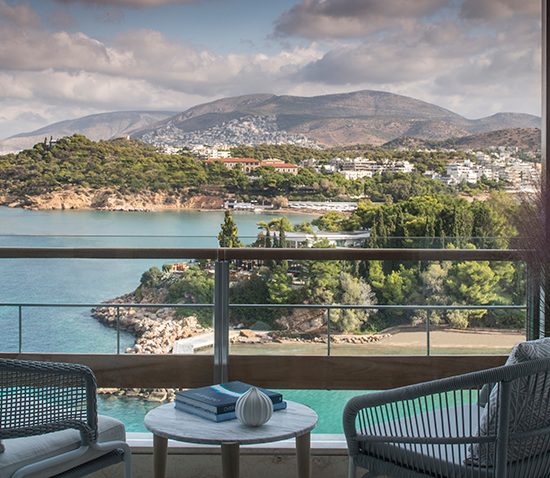 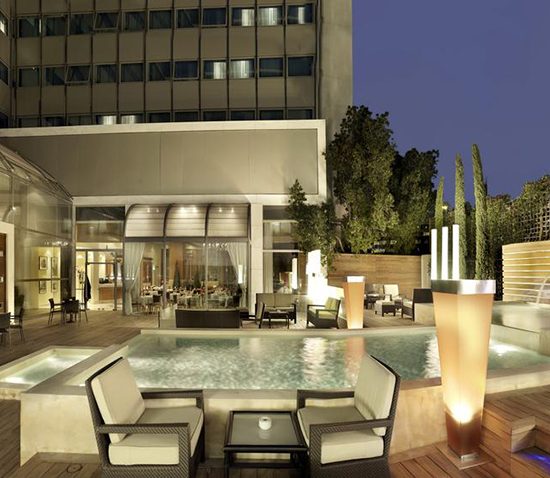 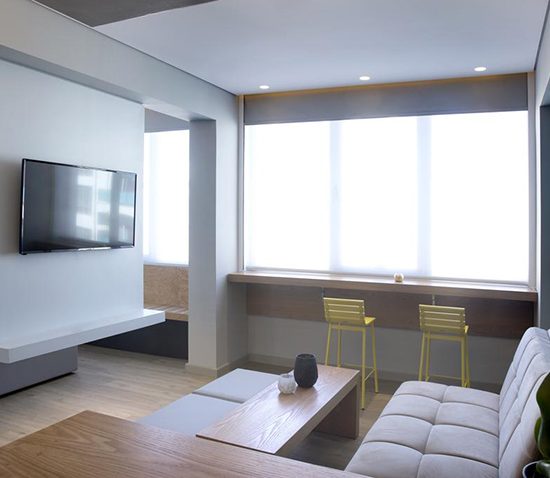 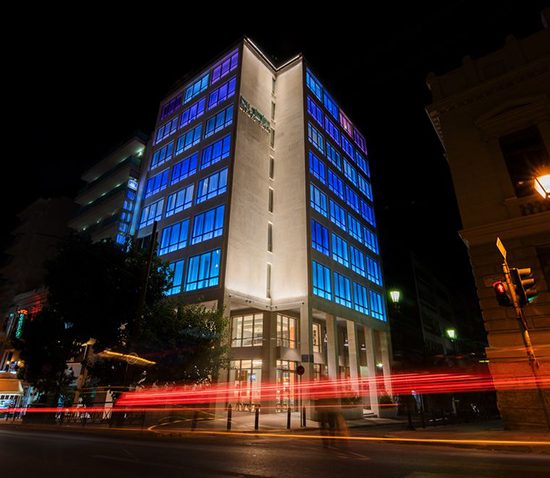 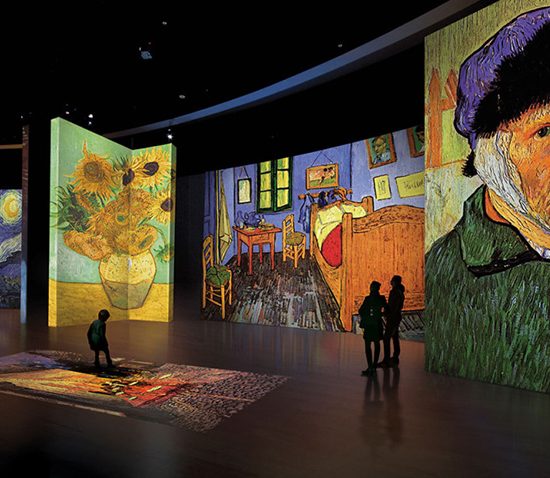 STING LIVE AT THE ACROPOLIS 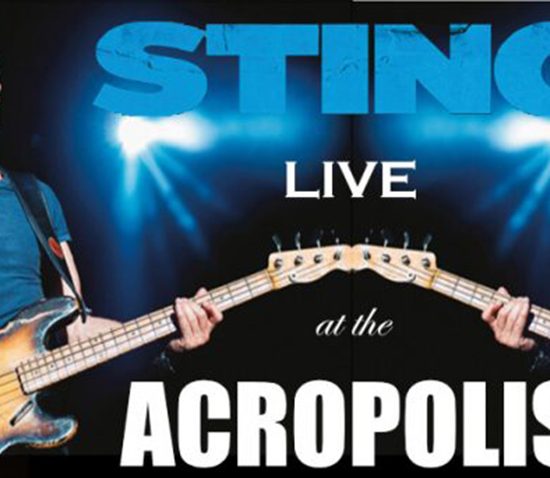 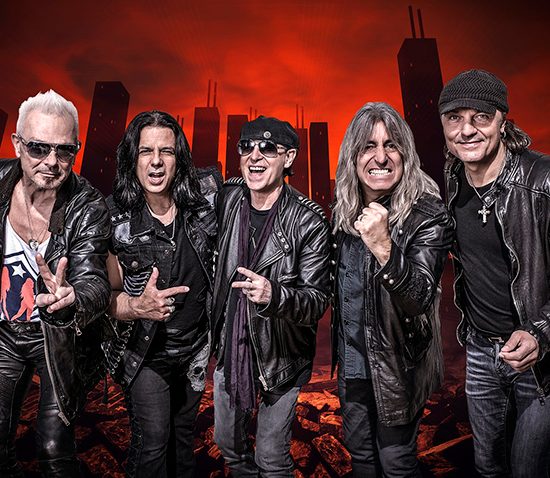 THE ΝEWEST HOTELS OF GREECE

Athenaeum Grand 4*
If you are a fan of modern design and do not want to get away from the historic center of Athens, then the Athenaeum Grand Hotel is the right hotel for you. The 90 comfortable rooms and the 2 stylish Penthouse suites with unlimited views of Athens perfectly complement the luxurious aesthetics of all the hotel’s interiors. This new hotel opened its doors on June 2017. For details visit the link: http://www.athenaeumgrandhotel.com/

Kubic Athens Smart Hotel 4*
The Greek capital this year also saw its first 56-room “smart” hotel, the four-star Kubic Athens, located near Omonia Square. The inspired renovation of an old industrial design building, with its original steel and glass façade preserved, gave birth to an urban chic retreat with a tech twist. This new hotel opened its doors on June 2017. For details visit the link: https://www.kubichotel.gr/

K29 Aparhotel
In a central place of Athens, K29 envelopes the true essence of urban comfort. A new, modern and stylish accommodation option has been created since December 2017. So guests in search of a new and smoothly connected Athens getaway with friendly service should search no further! For details visit the link: http://www.kappa29.com/

Marriot back in Athens
According to Marriott media report a deal has been set with Chandris Hotels & Resorts, to transform the existing Metropolitan Hotel Athens 5* to the new Marriott Hotel Athens 5*. The new Marriott Hotel Athens is expected to open mid of 2018. The hotel is strategically located on Syngrou Ave., opposite the Stavros Niarchos Foundation Cultural Center (SNFCC), a cultural complex designed by Italian architect Renzo Piano that houses the National Library of Greece and the National Opera. For details visit the link: https://www.metropolitan-hotel.gr/

Astir Palace re-opens under the brand of Four Seasons
On the sophisticated Athens Riviera, at the tip of a pine-clad peninsula, Four Seasons offers the best of both worlds: a laid-back seaside escape, just 30 minutes from the historical city centre. Discover the wonders of ancient civilization at the Acropolis, then return to Four Seasons to unwind and relax. Approximately 300 guest accommodations will include luxurious rooms, suites and bungalows. Eight restaurants, lounges and bars will create a dynamic new dining destination for locals and visitors alike, and a spa inspired by the teachings of Hippocrates will offer a sanctuary of escape, wellness and discrete luxury. The hotel is planned to open its doors on June 2018! For details visit the link: https://www.fourseasons.com/athens/

Hyatt Regency 5* in Athens
The former 314-room Athens Ledra hotel (and formerly the Ledra Marriott) is expected to re-open in 2018 as the Athens Hyatt Regency, following an eight million euros renovation. This will be Hyatt’s first presence in Athens as currently it only operates the Hyatt Regency in Thessaloniki. The Athens Ledra was acquired in June 2017 by the international real estate firm Hines and the European real estate investment platform Henderson Park. The Yiannis Daskalandonakis Group will manage the hotel. Web site to be launched soon.

Wyndham Hotel Group in Athens
Meanwhile, opposite the Wyndham Grand Athens, the US chain Wyndham is currently renovating a property for the opening of the 94-suites Wyndham Grand Residences & Suites in cooperation with Zeus International. The group will also launch its brand Dolce Hotels & Resorts in Attica through the opening of the 346-room Dolce Attica Riviera hotel at the former Mare Nostrum hotel in Vravrona, which will mainly target the MICE segment and the 129-room Ramada Attic Riviera hotel at the former Aquamarina hotel in Nea Makri, which will mainly target the leisure market. All three units are planned to open in the spring of 2018. For details visit the link: http://www.zeusintl.com/

Ikos Dassia 5*
The 403-room Ikos Dassia will open May 2018 in Corfu. The new 5* all-inclusive hotel is a combination of the former Dassia Chandris and Corfu Chandris, which were acquired in November 2016 by the Sani/Ikos Group. For details visit the link: http://ikosresorts.com/resorts/ikos-dassia/

Angsana Cofu 5*
In the summer of 2018, the opening of the 199-room 5* Angsana Corfu, of the Banyan Tree Group, is planned to open its doors. For details visit the link: https://www.angsana.com/en/greece/corfu

Gennadi Grand Resort 5*
In the area of Gennadi on Rhodes, the new 5* Gennadi Grand Resort will open in summer 2018. The eco-friendly luxury resort has 266 rooms and suites, most with a private pool. For details visit the link: http://www.gennadigrandresort.com/

Blue Lagoon City Hotel 4*
Close to the harbor of Kos town, the Blue Lagoon group has added the 4* Blue Lagoon City hotel, which has 133 rooms and suites, to its portfolio. The hotel is expected to open on May 2018. For details visit the link: https://www.bluelagoongroup.com/Blue-Lagoon-City-Hotel/The-Hotel

Opening ex Capsis Hotel in Rhodes
The legendary Capsis Hotel on the island of Rhodes is back completely renovated and under a new name: Akti Imperial Deluxe Resort & Spa 5*, set to open its doors to the public on May 23rd, this year. The 700-room hotel, formerly owned by the Capsis family, hosted some of the world’s most famous celebrities, actors and politicians in its heyday in the ‘70s. Under new management, the 5* Akti Imperial Deluxe Resort & Spa has undergone extensive renovations budgeted at 55 million euros which include eight restaurants, five bars, spa and conference facilities and is expected once fully operational to create some 260 jobs. For details visit the link: https://www.aktiimperial.gr/

Nana Princess 5*
In Hersonissos, the 5* Nana Princess will open this summer, offering 112 luxury suites and villas. The new hotel of the Karatzis Group is located next to its 5* Nana Beach. For details visit the link: http://www.nanaprincess.gr/

One & Only Keá Island Resort 5*
In November 2017, Kerzner International Holdings Limited entered into a partnership agreement with Dolphin Capital Partners and Dolphin Capital Investors, for the development of the One&Only Keá Island Resort, inclusive of long-term management. Situated on a 65-hectare beachfront site on the west side of Kea Island, the ultra-luxury lifestyle resort will include 75 resort villas, as well as One & Only private homes available for purchase. This will be the second One & Only resort in Europe as part of the expanding One & Only portfolio. The opening date is not yet announced. For details visit the link: https://www.oneandonlyresorts.com/one-and-only-kea-island-greece

Canaves Oia Epitome 5*
On Santorini, the family-run Canaves Oia Group will open the Canaves Oia Epitome, consisting of 24 villas with private pool, located in the town of Ammoudi.the hotel is set to open on May 2018. For details visit the link: https://canaves.com/canaves-oia-epitome/

Katikies Mykonos 5*
Also Katikies Santorini will open Katikies Mykonos located on the Agios Ioannis beach in Mykonos Island, this summer. The 5* hotel will offer 35 suites, a spa and restaurant. For details visit the link: https://www.katikies.com/katikiesmykonos/

CYCLADIC SNAPSHOTS: MEN & MONUMENTS – exhibition
Where: Byzantine & Christian Museum in Athens
When: On now – 28th February 2018
Why Go: Cycladic treasures never before exhibited
Cycladic Snapshots: Men and Monuments presents the people who have worked to uncover, protect and promote archaeological excavations in the Cycladic islands from the late 19th century to the present. The narrative moves chronologically, starting from the first excavations on the islands of Delos and Rhenea where a splendid ancient sanctuary and bustling harbor was discovered.

VAN GOGH ALIVE, THE EXPERIENCE – a multimedia exhibition
Where: Megaron Athens Concert Hall
When: 7th November 2017 – 4th March 2018
Why Go: For an immersive multimedia experience
The globally acclaimed “Van Gogh Alive – The Experience” makes its way to the city centre of Athens. Make no mistake – this is no ordinary art exhibition. Traditions of tiptoeing through unnervingly silent galleries and viewing paintings from afar in quiet contemplation are forgotten as visitors find themselves interacting with art in ways they never imagined. Van Gogh Alive – The Experience will stretch the definition of the word ‘exhibition’ as it stimulates the senses and opens the mind. And there’s no need to worry about the kids getting bored – the exhibition caters perfectly to both young and old.

ENRIQUE IGLESIAS in Athens – concert
Where: OAKA (Olympic Stadium)
When: 10th May 2018
Why Go: For the one and only reason to sing and dance
Enrique Iglesias is finally coming to Athens for one and only live concert!!! A talented singer, songwriter and record producer, Enrique Iglesias is also known by another moniker: the King of Latin Pop. His album Sex and Love reestablished him as Latin music’s most celebrated and sensual artist. He promoted this alluring album heavily during the Sex and Love Tour 2014 and the Enrique Iglesias and Pitbull Live 2017 tour. Iglesias’s live performance are heavily attended, but they boast an intimate feel, complete with regular audience interaction. With his top success “Duele el Corazon” he is writing music history. So don’t miss this and travel to Athens to take part to his live concert!!!

STING LIVE AT THE ACROPOLIS – special event
Where: Odeon of Herodes Atticus in Athens
When: 22nd & 23rd June 2018
Why Go: Don’t miss the concert of the year in Athens
Sting will perform two concerts as part the annual Athens and Epidaurus Festival in what will be one of the most memorable concerts held at the Odeon of Herodes Atticus, an iconic venue more than 1800 years old that lies beneath the slopes of the Acropolis.

ATHENS AND EPIDAURUS FESTIVAL 2018 – festival
Where: Various venues around Athens & Epidaurus
When: 1st June – 31st August 2018
Why Go: For an extensive line up of music, theatre & dance
The Athens and Epidaurus Festival is the city’s annual arts festival and a highlight of the Greek summer calendar. With a legacy that spans more than sixty years, today it incorporates a full programme of music, theatre, dance and visual arts that takes place at various venues around the city, including the former industrial buildings in Athens.

SCORPIONS – concert
Where: Panathenaic Stadium (Kallimarmaro)
When: 16th July 2018
Why Go: For the one and only reason to sing and dance
The iconic German rock band “Scorpions” are expected to be back in our Greece next July for a special concert at the Panathenaic Stadium. It was July 2016 when they performed their previous “farewell” concert at Nero Square in Athens, Greece during their “50th Anniversary World Tour”. Exactly two years after the concert of 2016, the group will meet its many Greek fans and present a show in collaboration with the Athens State Orchestra, “marrying” their rock melodies with the symphonic music.